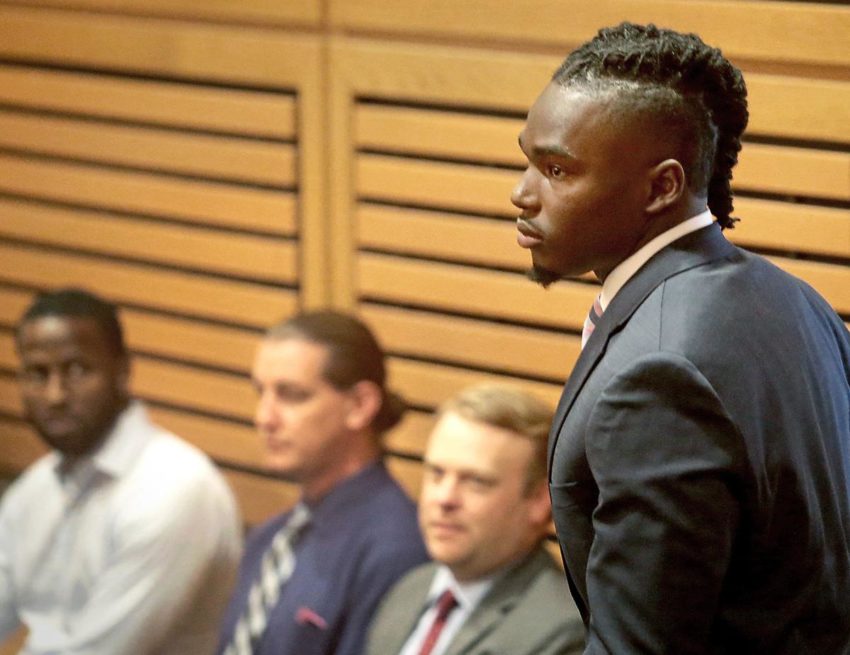 Wisconsin college football receiver Quintez Cephus is to face trial for sexual assault, with jury selection beginning Monday February 11. The trial is expected to last at least a week.

Cephus was widely considered the top receiver for Wisconsin, a perennial Big Ten college football power, until the allegations against him forced him to take a leave of absence.

According to the criminal complaint, Cephus met the women at a bar called “Double U,” where they said he “seemed like a gentleman,” before driving them over to his apartment. One of the women claimed that before arriving at the apartment, they were “very drunk,” “dying,” and “literally going in and out of consciousness.”

Cephus is accused of raping both the women at his apartment while his roommate, another player on the football team, took pictures. One of the women showed a police detective text messages which she sent to a friend after the ordeal, which said “Raped,” and insisted that the sex was not consensual.

However, during police interviews the next day, neither woman was able to recall the previous night other than fleeting instances, such as sprinting out of Cephus’s apartment.

Officers from the Madison Police Department testified that they interviewed one of the victims at 4:30 am at Meriter Hospital, where they smelled alcohol on the victim and watched her throw up. The woman told police that she “would never consent to sex with someone she didn’t know.”

Defense attorneys have presented a very different account of events. Closed circuit video footage from Cephus’s apartment, which has not been made public, allegedly shows the women leaving it without any difficulty or impairment, and exchanging text messages with Cephus asking him if he had found her vaping device in his apartment. The text messages also include a request to contact her again if he found a Juul, and a heart and kiss emoji. Cephus and one of the victims are also seen conversing for 25-30 seconds on video.

Based on the video evidence, lawyers for Cephus filed a motion to dismiss one of the two counts against him, but a judge denied it and ordered Cephus to stand trial.

In December, Cephus’s lawyers tried to have the other charge dismissed by claiming the relevant statute was unconstitutional. That motion was also denied by the court.

Both of the motions have laid the groundwork for a potential appeal should Cephus be convicted. In order to appeal convictions, defendants must cite error by the trial court. The denial of the motions to dismiss could be contested during appeal if Cephus were to be convicted.

The case drew further attention when UW-Madison attempted to investigate the incident before trial to find out if Cephus had violated the school’s code of conduct. That led to a lawsuit by Cephus against the university claiming that they violated his rights because the results of the probe could potentially imperil his criminal defense.

Accusations of racism and counterarguments by the families of the victims have continued in the run-up to the trial. Lawyers for Cephus accused the victim’s father of inappropriately influencing university officials to accelerate their probe of Cephus before his trial, and accused him of going on a “racist rant” during a meeting with officials. However, the family’s attorney Lester Pines has denied the incident took place.

Cephus’s father, Andre Taylor, was shot to death in 2017 after an argument outside a convenience store. However, Cephus has nonetheless managed to hire multiple notable attorneys, leading some to question who is paying for his defense.

Cephus’s legal team has been an object of critique from Pines. According to Pines, “An athletic department employee and apparent boosters accompanied Cephus to court. He is represented by no less than four law firms. And on social media and comments online following media reports, fans upset about the charges against Cephus have made inappropriate and angry comments.”

Among the lawyers enlisted by Cephus to fight the charges is Andrew Miltenberg, a high-profile New York lawyer who specializes in campus due process in sexual assault and rape cases.

In Wisconsin, emotions have run high over the case, with some observers putting forth impassioned indictments of campus rape culture and unreported assaults. But some others, including African-Americans and minorities, have blamed hypocritical “snow bunnies” for Cephus’s charges, saying that white women don’t want to be seen or admit having sexual relations with black men.

Cephus’s social media, including Instagram and Twitter, have been largely silent during the run up to the trial. If convicted of all charges, Cephus faces up to 40 years prison, although it is unlikely for first time offenders to receive the maximum sentence. In 2014, former Wisconsin football recruit Dominic Cizauskas was sentenced to just over a year in jail for raping a woman at her house on campus.

But the charges against Cephus are more serious.