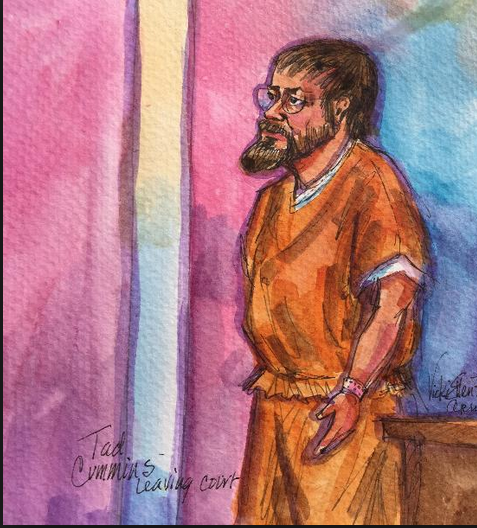 For a brief moment, everything seemed like it was going to go Tad Cummins’ way.

He had pleaded guilty, meaning Elizabeth Thomas and her family wouldn’t be subject to a lengthy trial. A chaplain testified that he was remorseful and had already made great strides towards rehabilitation. His public defenders asked only for the mandatory minimum, saying that a 30 year term requested by prosecutors would effectively be a life sentence at his age. Had he not left Tennessee, he would only be facing 2-4 years.

But in the end, the nature of his crimes was too dark to ignore. Cummins researched evasion techniques and worked assiduously to avoid law enforcement during the 38 days he abducted Thomas. He knew full well what he was doing when he planned his entire trip. He called himself a “Jesus freak” well before he kidnapped her.

Before Cummins was apprehended, he intended to take Thomas to Mexico by boat, by kayak if necessary. He had every intention of leaving the US with Thomas for a long time, if not forever. He planned to go even further south, perhaps to Central or South America, as far as possible beyond the reach of US law enforcement and Thomas’s family.

The judge agreed with both the prosecutors and the defense. Cummins had to be taken off the street until he was no longer dangerous. But the defense was correct in one regard: with no parole in the federal system, a 30 year sentence would be akin to a life sentence, which, while Cummins may have deserved, would have cheapened the value of such sentences for murder and other crimes.

And so, Cummins was sentenced to 20 years prison. He will be roughly 70 when he gets out – credit due to time already served in pretrial detention and possible good behavior credits applied to federal prisoners. In federal prison, inmates may earn up to 54 credit days per year for good conduct.

But while Cummins may have the chance to see the light of day again, there is no doubt that by the time he gets out, he will almost certainly be too old to do what he did with Thomas.